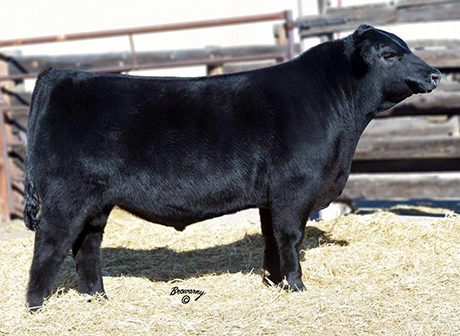 Within the last couple months we got the spring bulls weaned, sorted, and penned in their sale groups. They’ll remain penned in these groups at the ranch until the sale on Tuesday, February 20, 2018.

We’re excited about this set of calves and look forward to watching them mature into herd bulls for our customers.

Pen 1 features an intriguing set of three flush brothers by V A R Reserve out of a HARB Pendleton dam. They were born January 2-11 and were eye-catching throughout the summer. With them is a muscular Kesslers 100 X son out of a TC Aberdeen momma.

Pen 2 is a growth set of S Whitlock sons that are thick made, long and level. We’re pleased with the power of our first set of Whitlock calves. A couple of our favorites in the pen are 7538, a Whitlock x Summitcrest Complete with a 110 wean ratio; 7584, a big-bellied, thick calf out of a Kesslers Frontman first-calf heifer; and 7598, out of a Kesslers Swagger daughter.

Pen 3 brings us our first sons of JMB Traction. This is a nice pen to walk through! These bulls bring us a wide, deep, soggy look that we’re loving so far. Grandsons of TC Aberdeen and Kesslers Frontman are at the top of the pack so far.

Pen 4 is a calving ease set of Baldridge Breakthrough sons. These bulls were popular in 2017 with those who are looking for something to use on heifers that’s still going to pound the scales at weaning. Our favorites in this pen are out of AAR Ten X, BT Crossover, and Frontman momma cows. These bulls are stout, and don’t quit.

Pen 5 – our S Whitlock heifer bulls. You’re gonna want to take one of these guys home to the heifers. 7504, a Connealy Final Product grandson, had a 115 wean ratio and is just flat awesome. The rest of the pen is powerful as well. We love low birthweight bulls that still weigh up with the growth calves at weaning and yearling. This year’s set of Whitlock sons has easily convinced us to use him again.

Pen 6 is a mixed set of low birthweight bulls. They’re sired by our herd bulls, KR Cash 5212 and Bartels Cash 405 2012. One of our favorites so far is 7671, he’s out of a 10-year-old Mytty In Focus cow. These Barstow Cash grandsons are two different types but we’re appreciative of each set in their own right.

Pen 7 is our first set of KR Millionaire bulls. They’re out of cows sired by Kesslers Frontman, Connealy Black Granite, New Design 1407, AAR Ten X, and SAV Final Answer 0035. These bulls are coming on and are showing a nice hip, length and style.

Pen 8 – all we really need to say is POWER. This set of SAV Recharge and K Bar D Joe Canada sons are jam-packed full of muscle and shape. This is a set of bulls to pick through if you’re looking for something to crank some scale smashing calves out of your cowherd. Our heaviest weaning calf this year was a Joe Canada by HARB Pendleton, he’s currently weighing 980. This pen is also where you’re going to find one of this year’s top herd sire prospects in 7616 – he’s a SAV Recharge out of a Connealy Lead On that had a 119 wean ratio. We could point out something to say about every calf in this pen – they’ll make you drool.

Pen 9 brings you a selection of low birthweight bulls sired by Kesslers Legacy, Connealy Black Granite, Connealy Comrade, Kesslers Frontman, AAR Ten X, and Windy 702. There’s a lot of different pedigrees here and we’re finding things to like about all of them. Standouts so far include 7600, a Black Granite by Frontman, and 7618, a Ten X by Frontman. There’s also a maternal brother to ABS sire Frontman in this pen.

Pen 10 is our first set of KR Cash 5212 sons. They the youngest set of bulls in the sale but they’re catching up quickly. We appreciate the shape these bulls are showing, they’re muscular, level-made, long and deep-bodied. There’s a really interesting calf in here out of a SydGen Mandate daughter that’s a month and a half older than the others. If he’s any indication of how these calves grow, we’ve got a set to be pretty excited about.

Pen 11 is our last pen of spring bulls. They’re a mixed set of growth calves sired by Kesslers Legacy, Kesslers Resource 5085, and Thomas Waylon 4576. They all weaned right up with the AI calves and are packed full of potential.

Want to come take a look at the bulls? You’re welcome to stop by at your leisure from now until the bull sale. We’ve also got a set of fall yearling and coming two-year-old bulls to offer. Come visit us soon!