We are anticipating the 2016 sale after seeing how the bull calves weaned this year! This is going to be a powerful, performance oriented group of bulls that are sure to impress.

We had five calves wean over 900 pounds this year! 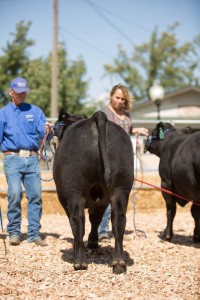 The heaviest calf was 5095 at 936 lbs; he’s a Kesslers 100 X out of a Pendleton daughter. We’re excited about 5095 because it looks like he’ll qualify as a calving ease bull. He had a 75 lb actual BW and his dam, Kesslers Bell 0556, is -3.0 BEPD and 100 X is also backed by generations of calving ease cows. We took 5095 to our county fair and people couldn’t walk by without stopping to look at him.

These five calves are currently in pens 1 and 2 at the ranch. Feel free to stop and see them any time!

If you can’t tell, we are extremely excited to offer this set of 100 X sons to you. From the moment they hit the ground we knew they were special. They are performance oriented with a rear-quarter muscle that is almost unrivaled. They may not be the most stylish calves but they are just flat impressive.

Our Black Granite calves are interesting. Be sure to check out 5102, he’s out of a Kesslers Front Range daughter and weaned at 890 lbs. He was one of the four calves we took to the county fair to show off. He’s packed with muscle and style